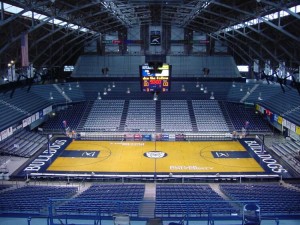 The inside of Hinkle Fieldhouse on the campus of Butler University in Indianapolis.

The last stop on the college basketball edition of the stadium tour takes us to Indianapolis, Indiana on the campus of Butler University.  The Butler Bulldogs, who won over the hearts of practically every sports fan in the nation last year (save for Duke fans/alums), have managed to defy the odds and return to the final four without their top player from last year, Gordon Haywood.  Each game, with the odds stacked against them, Butler manages to defeat teams that are far bigger, more talented and more athletic.  Like their opponent VCU, Butler has demonstrated the power and importance of team play and sheer grit. 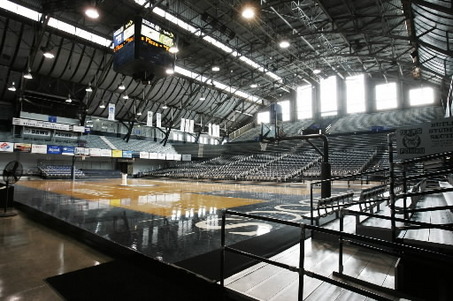 Starting out this tour, I had every intention on devoting an entry for Hinkle Fieldhouse, the home of the Butler Bulldogs.  As fate would have it, I was able to save this outstanding and beautiful facility for my final edition of the college basketball tour.  Hinkle Fieldhouse, formerly named Butler Fieldhouse was built in 1928 and is designated as a National Historic Landmark. 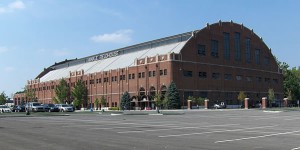 Outside of Hinkle Fieldhouse

Up until 1950, Hinkle Fieldhouse, with an original capacity of 15,000 was the largest basketball arena in the United States.  As it currently stands, the arena can host over 10,000 as seating capacity was reduced during an extensive renovation in 1989.

The design of Hinkle Fieldhouse is incredibly distinctive.  The air-hangar style creates a massive feel to the structure.  Additionally, the large windows in the upper decks of the fieldhouse allow for beautiful rays of light to pass through into the arena.  The distinctive design of Hinkle Fieldhouse appears to have become the unofficial design for future sporting venues in the state of Indiana.  Indiana’s two major professional sports franchise venues, Conseco Fieldhouse (Indiana Pacers) and Lucas Oil Stadium (Indianapolis Colts) share many of the same characteristics with the historic venue. 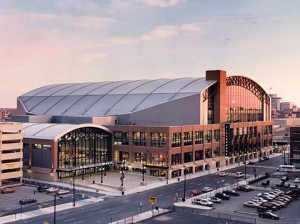 The outside of Conseco Fieldhouse in Indianapolis. 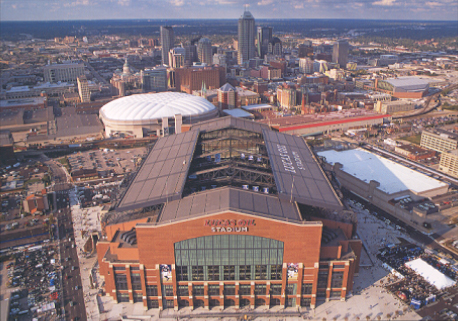 The outside of Lucas Oil Stadium in Indianapolis.

Not only is Hinkle Fieldhouse beautiful in its simplicity, it is steeped in remarkable history that lies at the heart of the folklore that is Indiana High School Basketball.  For many years, Hinkle Fieldhouse played host to the Indiana State High School Basketball Championships.  In 1954, tiny Milan High School capped off a remarkable run including defeating a team with future NBA Hall of Famer Oscar Robertson (during the semi-finals), to make it to the state championship.  In the championship game Milan High School knocked off heavily favored Muncie Central in a defensive battle, defeating the much larger school 32-30. 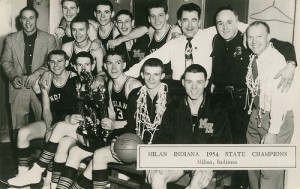 A picture of the 1954 Milan Men's Basketball Team that went on to win the Indiana State High School Championship.

The “Milan Miracle” was the historical inspiration for the critically-acclaimed movie “Hoosiers,” in which a small rural high school in the 1950s went on to win the Indiana State Championship.  In what I believe is one of the greatest scenes in any sports movie, centers upon the magnitude and beautify of Hinkle Fieldhouse.  Having made it to the state championship game, Head Coach Norman Dale (Gene Hackman) leads his club out onto the court at Hinkle Fieldhouse where the team is awe-struck by the size of the building.  In a brilliant move, Dale proceeds to measure the dimensions of the court to illustrate to his team that they are the exact same dimensions as their tiny gym back in Hickory, Indiana.  The move was a brilliant ice-breaker and helped tie in many of the themes surrounding the team’s triumphant march to the championship.  I’ve included the scene below for your enjoyment!