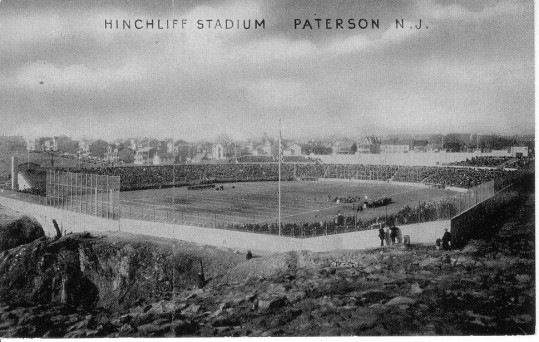 An aerial photograph of Hinchcliffe Stadium in its golden era.

I had actually planned on devoting an entry for this next stadium later on in the summer/early fall as part of the upcoming football season, however, sometimes events and occurrences dictate when it is appropriate to discuss a particular subject. As such, the next stop on the tour takes us to Paterson, NJ to Hinchcliffe Stadium.

What has always drawn me to stadiums and arenas are that they are concentrated areas of memories. Beyond the unique architecture of each venue, the amount of history that is generated from each facility is truly mind-boggling. Each time I pass by even a simple little league baseball field, I appreciate that the particular field may be viewed as hallowed ground for several people.

Additionally, a stadium and its history not only are a place to rekindle personal memories, they also tell their own story: a story of athletic accomplishment, community relations, and societal attitudes. As such, older stadiums serve as both a reminder of and a monument to previous generations and once thriving communities. While we typically associate historic stadiums with many cities in Europe or larger cities across America, many times, as is the case with Hinchcliffe stadium, historic stadiums are located in forgotten towns in the Northeast that have lost their identity due to the suburbanization that occurred in the second half of the twentieth century.

Hinchcliffe Stadium was once veiwed as shining gem in the city of Paterson, NJ. Perched upon a scenic bluff above the Great Falls National Historic Park opened its doors to the public on June 17, 1932 to host the New Jersey State Track and Field Championships. For the next 65 years, Hinchcliffe stadium, with a capacity of 10,000 was the site of countless sporting and social events. For twelve years, the stadium was the home site for the New York Black Yankees of the Negro Leagues and is only one of three Negro league stadiums still in existence. The stadium additionally played host to several semi-pro football teams and hosted exhibition games for the New York Football Giants.

Always adhering to its true calling to provide a venue for the city’s two high schools, Paterson Eastside (the subject of the movie “Lean on Me”) and Kennedy High School (formerly Central High School), Hinchcliffe Stadium played host to their annual Thanksgiving Day football game. In addition to hosting Paterson high school football, the stadium was used for the schools’ baseball games. Paterson native Larry Doby, the first ever African American to play in the American League, was one of the many standout players to play at Hinchcliffe. In 1997 the Paterson Board of Education was forced to close the stadium to the discovery of a giant sinkhole. 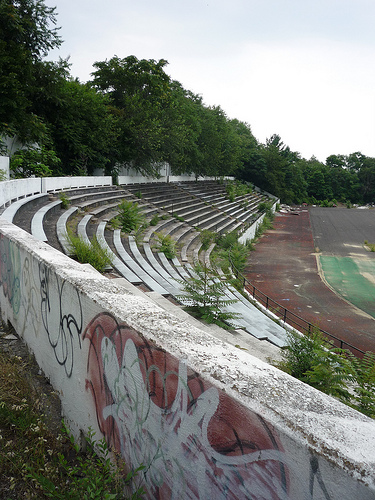 A picture of the vegetation and decay that has developed at Hinchcliffe Stadium.

Since closing its doors, the once beautiful and scenic stadium has fallen into a state of disrepair. Vegetation and weeds have overcome the stands, while graffiti and vandalism have compromised the bathrooms and overall façade of the stadium.

Fortunately, the memories generated in the stadium have continued to ignite the passions of several loyal followers. Many members of the North Jersey community have led the effort to promote a renovation project to restore the historic stadium to its original condition. This morning, Patersonpress.com reported that the city has approved a $2.25 million dollar bond to initiate the renovation of the stadium.

For more information about the stadium, I have included the links of several websites detailing the rich and proud tradition of the stadium.