What if . . . Brock Lesnar had fought Hong Man Choi? 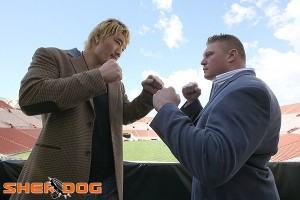 Brock Lesnar (right) in a stare-down with his originally scheduled opponent for his MMA debut, Hong Man Choi (right).

The thirteenth season of the “Ultimate Fighter” is being billed as perhaps the biggest in the history of the show.  The reason for this claim is simple:  Brock Lesnar is one of the coaches.  A former NCAA Heavyweight Champion and WWE Heavyweight Champion, Brock Lesnar, in a mere three years has become the biggest attraction in the entire sport of mixed martial arts.  Love him or hate him (most people seem to be in the latter), when Brock Lesnar fights, people pay money to watch.

With a professional record of 5-2, Brock Lesnar, perhaps more than any other fighter, has received unprecedented attention at such an early stage of his career.  Of the seven fights, six of those have been in the UFC promotion.  Brock’s first fight, which took place on June 2, 2007, was against a journeyman Korean Judoka named Min Soo Kim.  Lesnar was able to defeat Kim quite easily, prompting UFC President Dana White to sign Lesnar to a UFC contract.  Lesnar’s fight was the main event in a card that featured several notable fighters including Royce Gracie and Kazushi Sakuraba.  The event, which took place at the Los Angeles Memorial Coliseum, was a joint-venture between now defunct promotions K-1 Hero’s and Elite XC.  However, what many forget is that Lesnar was originally scheduled to face Korean K-1 Superstar Hong Man Choi as opposed to Kim.  Choi, a 7’2” giant, was a feared striker who had enjoyed great success in the K-1 promotion.

With Lesnar debuting as one of the featured coaches in this upcoming season I explore this question:  What if Brock Lesnar fought Hong Man Choi?

Attempting to establish itself as the legitimate contender to the UFC in the United States, Elite XC aimed to pull off a monumental show from the LA Memorial Coliseum.  Partnering with K-1 Hero’s, the MMA arm of the K-1 promotion, the show featured several intriguing fights including the long-awaited rematch between Royce Gracie and Kazushi Sakuraba and the MMA debut of Brock Lesnar.  Attempting to capitalize on the large Asian population on the West Coast, as well as provide Lesnar with an intriguing battle, the promoters of the show matched Lesnar up against Hong Man Choi.  Choi, standing 7 feet 2 inches tall, had made it to the finals of the 2007 K-1 World Grand Prix and was beginning to make a successful transition to MMA. 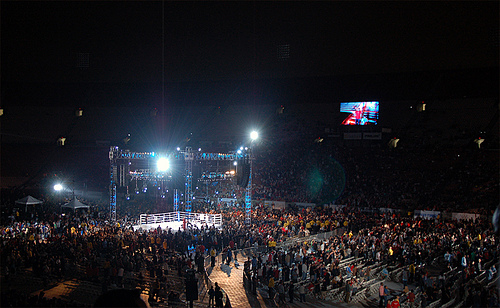 K-1 USA Dynamite was an attempt for Elite XC to counter the UFC's meteoric rise in the MMA world.

Unfortunately, Hong Man Choi was forced to withdraw from the bout when he was denied his license by the California State Athletic Commission when it a benign tumor on Choi’s pituitary gland was discovered.  As a result, Korean Judoka Min Soo Kim was tagged as Choi’s replacement.  With virtually no standup game, Kim essentially served as cannon-fodder for the massive Lesnar who finished Kim in less than two minutes.  The video of the fight can be seen below.

Seeking a greater challenge, Lesnar signed a multi-fight contract with the UFC and made his debut for the promotion on February 2, 2008 against former UFC Heavyweight Champion Frank Mir.  Though he would lose via submission (kneebar), Lesnar provided fireworks during the short fight as well as impressive numbers at the box office.

Lesnar earned his first win in the company several months later in August of 2008 when he dominated established veteran Heath Herring to earn a unanimous decision victory.  Due to his impressive performance, the UFC gave Lesnar a title fight against the returning Randy Couture at UFC 91 in October of 2008.  Lesnar shocked many in the MMA world soundly defeating Couture in the second round via TKO.  In the match, Lesnar displayed his top-flight wrestling ability in addition to flashing knockout power. 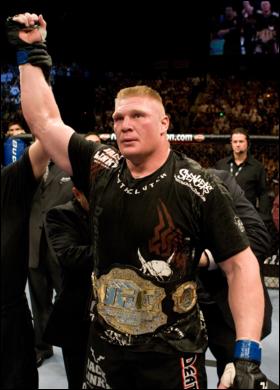 In only his fourth fight, Brock Lesnar defeated Randy Couture to win the UFC Heavyweight Championship.

With his championship victory, Lesnar was given the honor of main eventing UFC 100 against his newly-created arch rival, Frank Mir.  In a dominant performance, Brock Lesnar pounded Frank Mir mercilessly for two rounds en route to a TKO stoppage.  With the win, Lesnar cemented his status as one of the best heavyweights in the world.

After recovering from a scary bout of diverticulitis that threatened his fighting career, Lesnar triumphantly returned to the Octagon to defend his title against Shane Carwin at UFC 116 in July 2010.  During this fight, Lesnar survived Carwin’s initial onslaught in which the challenger dominated Lesnar on the feet.  In the second round, Lesnar was able to secure the takedown and submit Carwin via side choke.

Lesnar’s inadequacies on his feet were exploited in his next bout this past October when challenger Cain Velasquez quickly dispatched of the champion in the first round.  After weathering Lesnar’s initial storm, Velasquez was able to hurt Lesnar with several clean punches which clearly disoriented the champion sending him to the mat in the turtle position.  Unable to intelligently defend himself, referee Herb Dean stopped the fight. 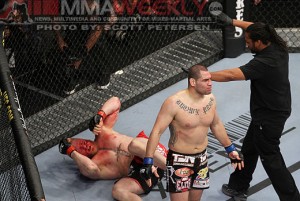 As a result of an injury to Cain Velasquez’s shoulder, #1 contender Junior Dos Santos was left without a match for the immediate future.  Recognizing an opportunity, the UFC approached Lesnar to see if he would be interested in coaching for the upcoming season against Dos Santos, to which he agreed.

What would have happened?

At the time of Lesnar’s MMA debut, he was still incredibly green with regards to the nuances of MMA.  Even though Lesnar relied upon his superior wrestling skills against Kim, and surely would have done so against Choi, I believe Choi would have overwhelmed Lesnar on the feet.  Several years into his MMA career we have seen Lesnar essentially turtle up into a shell in his last two fights when his opponent unleashes an onslaught of strikes.  With Lesnar being ill-equipped to handle such a barrage of strikes four years into his career, I highly doubt Lesnar would have responded to Choi’s striking in any other way. 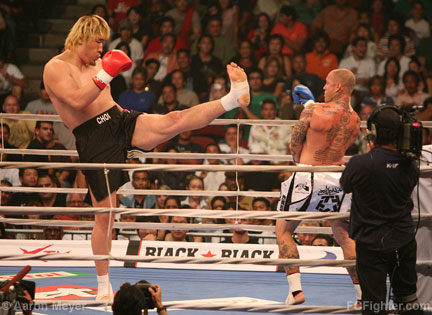 Hong Man Choi (left) had enjoyed a great deal of success in K-1 prior to his scheduled bout with Brock Lesnar.

Embarrassed by his ineffectiveness and convincing defeat, I believe Lesnar would have decided to walk away from the sport of MMA in favor of returning to the squared circle where he would have been able to make more money for his family.

(2) Fabricio Werdum would still be in the UFC

After Randy Couture’s year-plus sabbatical ended, the UFC elected to essentially create a four-man tournament between Randy Couture, Brock Lesnar, Antonio Rodrigo Nogueira and Frank Mir.  After two “semi-final” matches (Couture vs. Lesnar and Nogueira vs. Mir), the UFC envisioned that a unification bout would occur between the two winners in the future.  Such was the case as both Lesnar and Mir, the winners of their respective bouts at UFC 91 and 92, met in the main event of UFC 100 to unify the UFC Heavyweight Championship.  The odd man out of the equation was Brazilian fighter Fabricio Werdum.  Werdum, who had won consecutive bouts against Gabriel Gonzaga and Brandon Vera in impressive fashion, was very upset at the fact that he was left out of this tournament.  After a shocking knockout loss to Junior Dos Santos, the disheartened Werdum was cut from the promotion and found his way to Strikeforce.

Since in Strikeforce, Werdum has enjoyed tremendous success.  After defeating Antonio Silva in an entertaining affair, Werdum became the first man to defeat the iconic Fedor Emelienenko in over a decade as Werdum submitted the Russian in the first round. 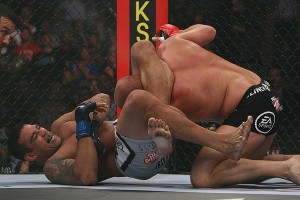 Without Brock Lesnar, the UFC would have placed a greater emphasis into building Fabricio Werdum (bottom) as a legitimate contender in the UFC Heavyweight Division. As a result, the submission victory over arguably the greatest fighter of all-time, Fedor Emelienenko (top) would have not occurred.

Had Lesnar left the sport after his first match against Choi in 2007, Werdum would have been included in the four-man heavyweight tournament that was created when Randy Couture returned to the UFC.  Even if Werdum was not victorious, his participation in the tournament would have continued his ongoing relationship with the UFC and prevented his defection to the Strikeforce promotion.

(3) The main event of UFC 100 would have been Georges St. Pierre against Thiago Alves

In what was the actual co-main event of UFC 100, Georges St. Pierre successfully defended his welterweight title against Thiago Alves.  With Lesnar a non-entity in the promotion, I believe Randy Couture would have already lost his UFC Heavyweight Championship to Antonio Rodrigo Nogueira in a manner similar to their actual fight at UFC 102. 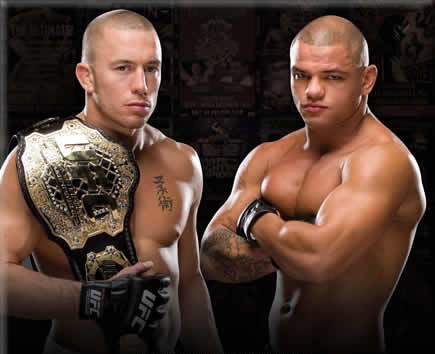 Without Brock Lesnar as a member of the UFC roster, Georges St. pierre (left) and Thiago Alves (right) could have been the main event for UFC 100.

As a result, without a top name fighting for the UFC Heavyweight belt, the UFC would have opted to place their top welterweight star as the main event for this prestigious event.

(4) Frank Mir would not be in the UFC

As mentioned previously, Frank Mir has been Brock Lesnar’s arch-nemesis since he has become a fighter for the UFC.  Immediately after their first fight was signed, Mir began taunting Lesnar, making fun of the fact that Lesnar was a professional wrestler.  Though Mir was victorious during their first bout, the animosity between the two continued through their second fight, in which Lesnar won.  Moments after their second fight at UFC 100, Lesnar went right up to his battered opponent yelling at him.  Mir seemed unwilling to let go of Lesnar’s post-fight antics, as he was even quoted as saying he would be the first to kill an opponent (Lesnar) in the ring.

Trash talking aside, Frank Mir has greatly benefitted from Lesnar’s presence in the UFC.  With Lesnar taking on the role as a natural “heel” (term for a villain), Mir quickly became a popular figure in the eyes of the fans.  After sustaining serious injuries as a result of a motorcycle accident, Frank Mir, a former UFC Heavyweight Champion, had been unable to recapture the magic that made him one of the top-ranked heavyweights in the world.  The question with Mir had always been whether he would ever be motivated enough to supplement his god-given talent with the necessary training to allow him to realize his true potential as a fighter.  Lesnar’s antics appeared to be a catalytic moment in Mir’s career, as he suddenly became a fighter who lived in the gym and enjoyed a grueling training camp.  As a result, we have seen Mir become a more well-rounded and superbly-conditioned fighter. 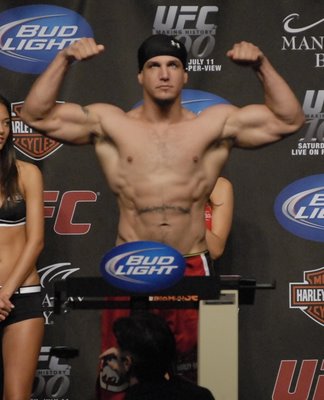 Without the presence of Brock Lesnar, Frank Mir (pictured above) would not have resurrected his career and conditioned himself in the manner he has.

Without Lesnar, Mir would not have had the spark needed to truly devote himself into becoming the best fighter he can be.  As a result, I believe Mir would have continued to struggle, which would have led to his release from the UFC.

(5) This season of the Ultimate Fighter would have featured two bantamweight coaches:  Dominick Cruz (UFC Bantamweight Champion) and Urijah Faber.

Though the UFC would have had to sacrifice introducing Faber to the UFC audience with a live fight, I believe if there were no Brock Lesnar, the UFC would instead elect to highlight their newly created weight classes. 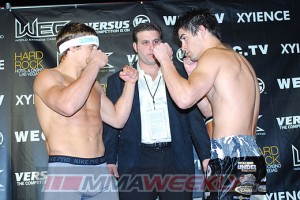 Without Brock Lesnar, the coaches for the 13th season of the "Ultimate Fighter" could have been current UFC Bantamweight Champion Dominick Cruz (right) and Urijah Faber (left).

The best way to do so would be to have their current bantamweight champion coach against his rival Urijah Faber.  The 10-12 week show would have provided an ample opportunity to introduce both fighters to the public and generate enough interest in a title match.

This entry was posted in Brett Halpern, Japanese MMA, MMA, Strikeforce, UFC, What if... and tagged Brock Lesnar fought Hong Man Choi, Mixed Martial Arts, What if.... Bookmark the permalink.