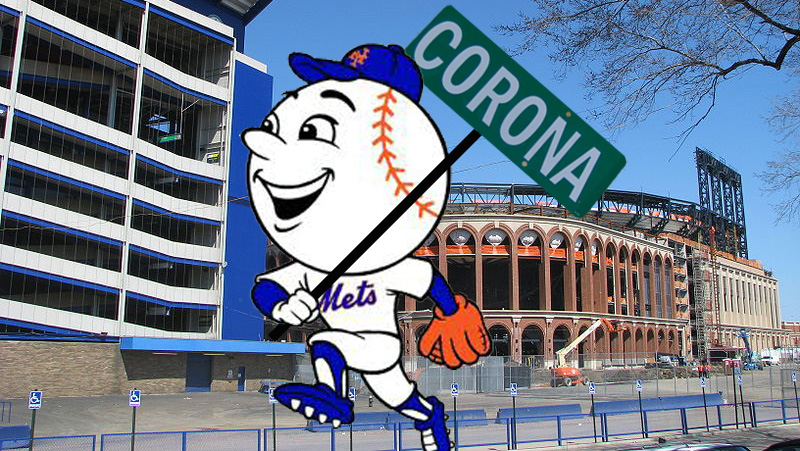 In 1957, New York lost two of its three major league baseball teams when the Brooklyn Dodgers and New York Giants relocated west to Los Angeles and San Francisco, respectively.  In 1962, the National League expanded, adding the New York Mets.  The Mets logo and color scheme were a hybrid of the two now defunct New York National League franchises; using the blue from the Dodgers and orange from the Giants.  Their NY insignia were also a throwback to the NY insignia of the Giants.

Growing up as a New York Mets fan in a household filled with Yankees fans, I have grown accustomed to the taunts and consistent berating that comes natural in the Yankee-Met rivalry.  During any broadcast of a Mets ball game, the announcers always referred to Shea Stadium as “Flushing, New York.”  With such an unfortunate city name as “Flushing” as the home of the New York Mets, this too added to the constant taunting as the Mets have historically been viewed as the basement dwellers of New York city baseball.  The leader of the charge with respect to the verbal taunts slung in my direction, were from my beloved father, who hails from Queens and is a lifelong Yankees fan.  Perhaps of all the verbal jabs that I have taken over my life with respect to being a Mets fan, the most comical and interesting have stemmed around the fact that my father has explained to my brother and I that the Mets do not actually play in Flushing, New York, but instead play in Corona, a municipality which neighbors Flushing.  With the creation of this blog, I now have the ability to ponder whether my father’s claim has any validity.  As such, on with the analysis:

The official address of Citi Field is 126th Street and Roosevelt Avenue, Flushing, NY 11368.  Ok, that seems rather easy.  Also, a quick search of the United States Postal Service reveals that Flushing, New York does in fact contain 32 different zip codes, one of which is 11368.  However, the problem comes from the fact that a similar search of Corona, New York reveals only one zip code:  11368.  Therein lies our problem; two neighboring cities within the borough of Queens share the same exact zip code.  This is starting to sound like a problem that only Brett and his fellow New Jerseyans would encounter.

Here is a zip code overlay map of the areas surrounding Citi Field:

Clearly, Citi Field’s zip code is 11368, so that much we know is right.  But where does Citi Field belong? Flushing or Corona?  The map shows Southwest of Citi Field is Corona, and to the Northeast is Flushing.  To solve this discrepancy I returned to the source of the question, my father, who has spent the better part of 60 years in this exact same area; both living and working.

He was able to recall that prior to Shea Stadium’s construction in 1963; the site was used as a municipal parking lot that was within walking distance of the express 7 train.  The station was entitled “Willets Point Boulevard-Corona.”  Further, after construction of Shea was completed, the exact same station was renamed “Willets Point-Shea Stadium.”  Hmmm, we might be on to something.

My father goes on to explain that at one point prior to Shea Stadium’s completion, the Roosevelt Avenue Bridge, located to the east of Shea Stadium and Willets Point Boulevard, had signs at the middle of the bridge.  The signs while traveling East read “Flushing” and traveling West read “Corona.”

60 years ago, the City of New York and Queens Borough distinguished the boundary line of Corona and Flushing on the Roosevelt Avenue Bridge with signs.  The 7 Train stop which services Citi Field was once named “Corona.” At least two businesses located to the East of Citi Field have Corona mailing addresses and zip codes and at least one business to the West of Citi Field has a Corona mailing address and zip code.  For some reason, as it currently stands today, 126th Street and Roosevelt Avenue is considered Flushing, but history shows that this was not always the case.

In August of 2010 Mets’ closer Francisco Rodriguez and his father-in-law were involved in an altercation following a game at Citi Field and the father-in-law was transported to a nearby hospital.  The ambulance company that responded to the call… Yupp, you guessed it; the Corona Volunteer Ambulance Corps.

The Corona Volunteer Ambulance Corp. Responds To a Call at Citi Field

With this research I now can only wonder if perhaps adopting the Flushing, New York address, as opposed to the apparently correct address in Corona in some way doomed the franchise.  Maybe instead of electing to play in a city that is named after a verb associated with toilets, the team could have embraced Corona as their home.  Or as my father has always said, “the Mets will never be successful until they admit where they really play; Corona.”

One Response to The New York Mets Play In Flushing… Right?